Intent, Initiation, Execution, Effect - fictional things, probably the single most direct fictional content to be interfaced with real-people speaking and using rules, in the hobby. In a recent dialogue with Zac Porcu, he called it "the beating heart of role-playing."

Briefly: design zone 1 is to establish a linear order and then to carry it out. It includes possible random factors for the order itself, and scattered patch-methods to include reactivity. Design 2 is to establish specific or general outcomes and then to narrate how it got that way later, including the order of what happened. That one includes possible mix-it-up means for who's talking.

My own design work has touched both, but through an orthogonal or oblique vector, placing random factors and the role of (for instance) stating Intent into non-typical places. I wouldn't mind seeing some other eyes on what I've done, and I don't mind at all stating that most RPG design this very day has remained rudimentary, at best all too embedded in one of the zones and at worst simply bad. Let's see if that gets the conversation going.

Here are the original threads from lonnnng ago: The four steps of action (for Ron) and What is IIEC? It was especially nice to have Manu, whom you'll see in those, present in the recorded Lab conversation. Probably the most explicit application at the Forge came in Frostfolk, carrying on, beginning with the words COMPLEX CONFLICT in the middle of one of my posts.
Department:
Seminar
Games:
ExaltedRuneQuestChampionsDungeons & Dragons sensu latoDungeons & Dragons 4th editionTFT: MeleeOver the EdgeAmberSorcererThe PoolInSpectresBurning WheelThe Riddle of SteelPrimetime AdventuresBlades in the DarkMy Life with MasterDogs in the VineyardSpioneCircle of HandsLovecraftesqueDirty SecretsMongrelUndyingZeroHero WarsCastle FalkensteinLace & SteelComme Il Faut
Tags:
initiativeorder/actionIIEE

How they sequence in the comics

Granted comics are a completely different medium from table top roleplay, I thought it might be informative to look at how actions aree sequenced in superhero comic books.

I had a close look how character action is sequenced in panels of two comic books from 1979: Avengers #89 and Uncanny X-Men #117. In a fight, panels almost always feature one hero attacking the threat -- there's rarely a third part involved in a given panel. When a single big threat is introduced, each hero will have a go at it -- one panel of initiating and one of result. This often results in the big threat stunning or knocking aside each hero in succession. Other villain minions then joined the fight and each heer engaged individually with each lesser threat, so we never got to see coordination against the big guy. There were one or two panels where, when you think about it, it looks like the heroes in the background are just standing in astonishement while a powerful opponent gets away or makes some progress in their plan.

That sort of thing just doesn't happen in the RPG I've played. If the players are a team, they are all  over an individual threat.

If one were to recreate this sequencing in an RPG, I wonder if the players would feel it was too restrictive?

And perhaps that isn't the

And perhaps that isn't the question. Would it be worth playtesting a system that sequences like that? Does the Circle of Hands system produce that effect (it might, but I haven't played it yet.)

I made a video to reply:

I made a video to reply: Champions Now Contingency. I was interrupted a couple times while filming, so brilliantly managed entirely to fail addressing your specific examples. I put in a note where I had them in mind to talk about ... And it's more of a "well, here are the issues as I see them," rather than a definite answer. But the answer itself is a primary design consideration of the work in progress, and has been from the start.

Just in case someone reads this and wonders. My mistake for not thinking more while I was writing. Avengers #89 though is where I got most of the commentary I made.

I was wondering about that.

I was wondering about that. The violence in that X-Men issue is mainly Charles Xavier and Amahl Farouk sitting in a bar staring at each other. So good, I'm not missing something. 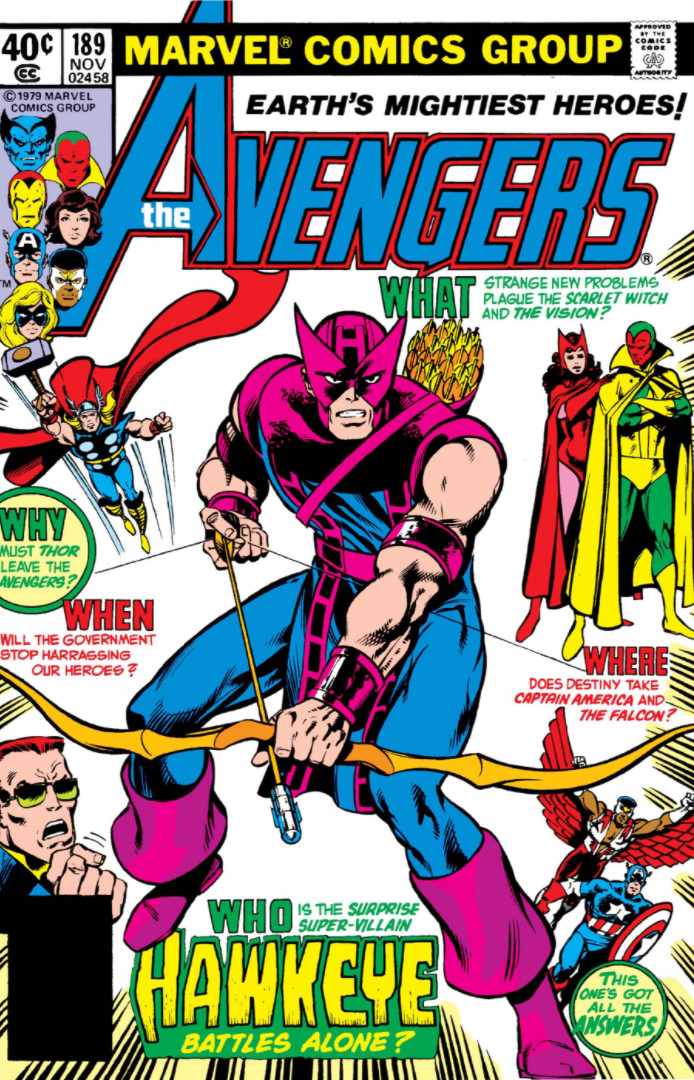 Well heck! I thought I

Well heck! I thought I filtered for 1979 when I went looking for samples, but it looks like my Marvel online history says it was #89 from 1971. It's the issue where Vision and other Avengers at first run into the fugutive Captain Marvel, then help him escape the law. It shows the "each of us charges up to the opponent in sequence and gets beat down" pattern. As does #90 where they battle Intergalactic Sentry 459.

Oh well, guessed wrong, given your emphasis on the year.

You're right considering the fight against Annihilus, but on the other hand, we're talking about a classic Arrogant Greater Being sequence of an overwhelming single foe. Yes, Buscema is making that happen simply by leaving out any pre-action "who can get there" positioning information, and showing effects. Even those effects are pretty vague, like what that chest beam actually does beyond throwing everyone around with grimaces.

In this case, too, we're talking about two other relevant points: first, that Thomas' pet hero, the Vision, effortlessly beats Annihilus with his surprise-you intangibility; and second, that the entire point of the scene is merely to distract the Avengers so Mar-Vell can zoom off in the quinjet. In role-playing terms? A railroad. The parallel in media, down the very same techniques (confusion about positioning and timing) could not be more perfect if we tried.

Speaking as a dedicated reader, I surmise that Thomas, like Claremont later, wasn't very interested in the fights-plus-drama as Lee was. Therefore the physical drama of his titles was mainly left to the artists' desires of the moment. His Avengers are kind of a textbook in this regard, moving from the reliably-storytelling but overbooked and therefore efficient Sal Buscema (whom I like, so don't misunderstand me about that) to the young, hungry, and ambitious Neal Adams just a couple issues later.

(I'm catching up with older

(I'm catching up with older videos.) What impressed me about this discussion is how far IIEE goes - you guys ended up touching upon a lot of topics I never realized were related to, or part of it. Scene framing and the Bounce come to mind. I think it's all very clear when Ron says "These old games do work, but take a look at how complicated they get."

Registration is live for September coursework!

September coursework registration
Author: Ron Edwards
Department: Seminar
Not to be too "100th monkey" about this, but there is a noticeable critical mass phenomenon showing...
Halfway Heroes - Session Five
Author: david_dungeonmatter
Department: Actual Play
This session started on May 11, 2022 (in-game). It opened up with me describing a panel where Ed...
July Q and A
Author: Ron Edwards
Department: Seminar
These are some very think-y questions! Including a lot about beasts and monsters. I want to clarify...
Halfway Heroes - Session Four
Author: david_dungeonmatter
Department: Actual Play
Session four started on May 10, 2022 (in-game). We began with Samuel Holt (aka The Huntsman) paying...