Scaling down into fights 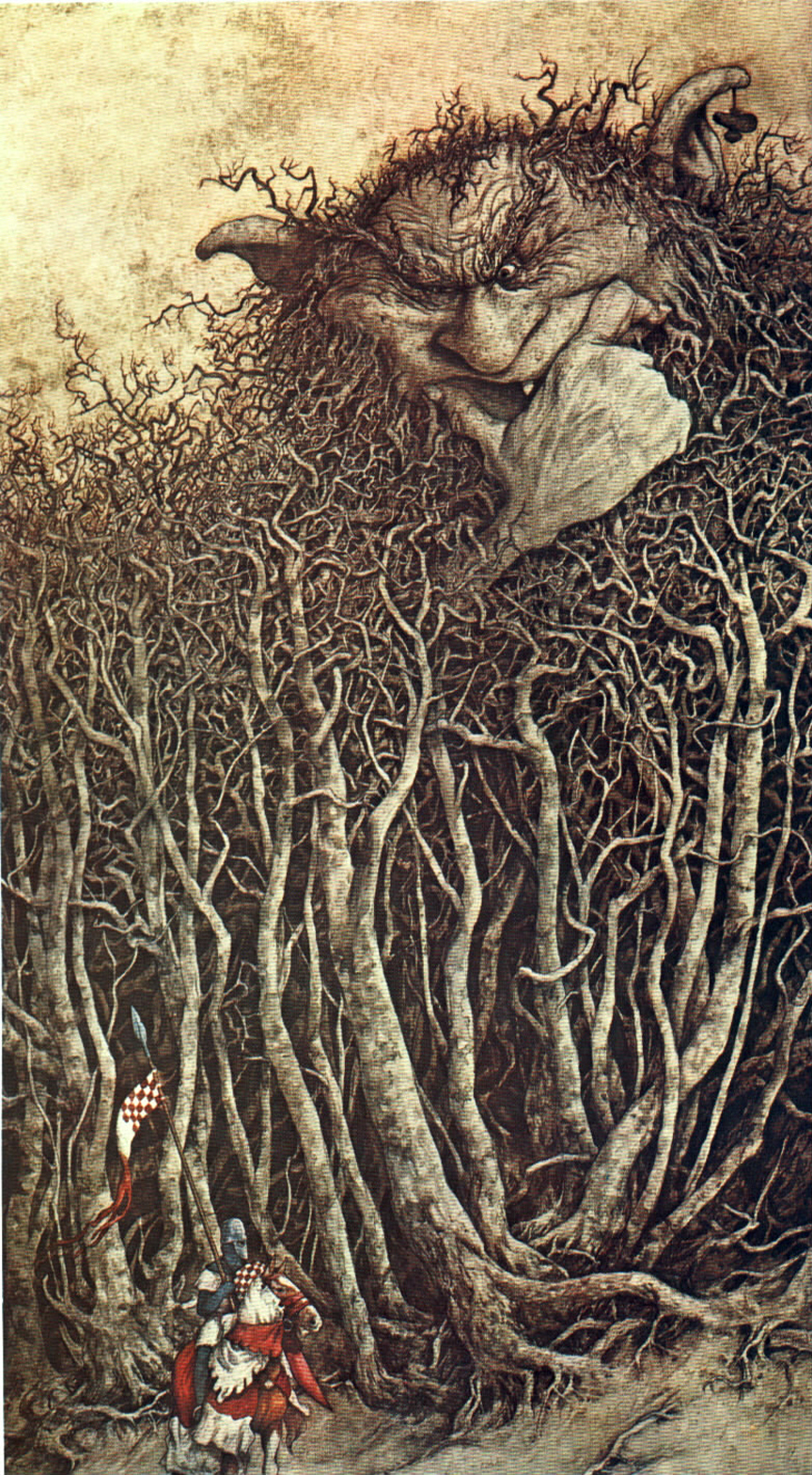 I love this quote from The Mountain Witch: "All conflict is a form of combat." For Justin Nichols' Kinfolk, the issue is that he's got a big whole-game arc of whether the invading industrials can be successfully repelled or otherwise stopped by the fey folk ... and sure, you can make a chapter structure, and sure, you can think of points that accumulate through lower-scale actions and fights ... and you can think about long-term consequences to your characters as they reach into deadlier aspects of themselves and transform into sinister haunts ...

... but none of that can overcome the fact that "roll, get a success, say 'ooh!' and narrate whatever I want" is quite boring, because the actual stated actions were irrelevant if all we want to know is whether we get one of those long-term points or not. (I can name several games that look like this but are not boring, and if you want to know the difference, review my presentations on playing Primetime Adventures vs. playing some abomination that they told you was Primetime Adventures. But my point is that many of them are.)

... and I can name several games that dive heavily into micro-actions and micro-movements but also seem strangely boring in terms of long-term outcomes. So merely going "every action needs a quantity and a mechanic" isn't going to do it either.

We're talking about actions during combat (which could be any conflict!) and their contingent effects upon the outcomes, and let's permit the big picture of the big game take care of itself for a while. Justin and I are embarking on an intensive application of "what we all know," but which for some reason game design often doesn't - when & how are fights fun, and when & how do their immediate effects and long-term consequences matter?

Previous discussion of Kinfolk is threaded throughout our previous dialogues in Seminar, the Design Curriculum series.

So what games did you point Justin at in the end?

I'm thinking about the German

I'm thinking about the German game DeGenesis, The Shadow of Yesterday, and if it's feasible to provide somehow, Extreme Vengeance. The biggie would be some situation using D&D 4th edition in whch a Skill Challenge and a fight were firing simultaneously, perhaps in the context of a Major Quest and someone's (very different) Minor Quest.

Thanks for this series

I wanted to jump into the comments and say thanks to Ron and Justin for participating in the "Design Curriculum" and, now, this Consulting series. These discussions have provided so many useful models for thinking about design, and even set me to sketching out game ideas in my spare time. I am looking forward to getting through the Design Curriculum series so I can watch this new one.

It would be very helpful to

It would be very helpful to see some more comments at those posts too - please feel free!

Remember that we said we'd run a little Pendragon and The Shadow of Yesterday combat for comparison! It starts here within the playlist.

Justin and I play through some Circle of Hands combat and apply some observations to Kinfolk. Here's the link, inside the playlist.

I'm excited to give this a

I'm excited to give this a listen. I had a cool experience listening to the Pendragon and Shadow of Yesterday conflicts.

I was initially put off by how little substance and context the characters had, particularly in the Pendragon sample. I wondered who they were, why they were fighting, etc. But by the second round, the characters' actions had begun to leave blood-and-sweat-soaked marks on each other and the fiction, and at the end of the fight, I felt like I'd witnessed a scene go from absolute zero to living story in a very short amount of time.

I didn't quite feel the same layering in TSOY conflict, but that may be because the rolls that really would have torqued the conflict in a new direction (the rat man trying to wrest the spear away, etc.) didn't succeed.

I agree about the

I agree about the comparatively (slight) lower energy in the second combat, but discovered or remembered how we should have been approaching it about halfway through. It could have been a lot better with only the smallest amount of orientation before hand, but I know why it didn't. Justin had studied the Pendragon rules before we played the combat, but I kind of tossed in The Shadow of Yesterday without a chance for him to review it, and I hadn't reviewed it as carefully as I should have either. So our play was a little more exploratory in terms of rules use, for that one. Again, in retrospect, I think the system has merits which would yield the same vivid effect of "hey wait, I am interested now" at about the equivalent point.

Hearing the system in action

Hearing the system in action made something in The World of Near (my exposure to TSOY) click:

whether the war between an empire and a primitive tribe comes down to brawling or logistics or some completely different Ability is a nuanced dance of scene framing, narration, player initiative and stakes negotiation: [...] this largely is the game of SOLAR SYSTEM.

So there's a positive application to this idea (you can drive toward a certain Ability being pivotal), and a negative one (you can use the tools available—scene framing, Ability choice, etc.) to also push other Abilities out of that pivotal role.

I'm not seeing this. What

I'm not seeing this. What Eero describes in that text is a personal phrasing for what happens in many role-playing games and experiences, in that what players do contributes to situations. It's not anything special and is not represented by specific game mechanics. That section, perhaps over-elaborate, discourages module-style hard framing. [Not that this technique is necessarily a bad thing, but the Solar System is built for emergent, as-it-comes conflict, much like Trollbabe (the grand-aunt of the system), rather than planned fights.]

What you're describing looks far more manipulative and competitive, striving to optimize the abilities you'd like to use (i.e. the better ones) though bullying one's preferred situations into existence. Basically, "I can beat the GM at his own game now that I have these tools that only he used to have, so he can't force me to use my lesser weapons." It interprets "dance" as hostile. If that sounds negative, please recognize that I'm basing it on a decade-plus observation of what has happened within the self-designated story-games design culture: instead of abandoning toxic power problems in the older GM/player construction, it rubs them all over everyone. It's a real problem marked by passive-aggressive friendliness and by invoking "collaboration" as an ideal, when it's anything but.

Now, accepting and basically knowing that you (Noah) are not an asshole, I'm less concerned about you representing that point of view than having perhaps fallen into it without recognizing its toxicity. If I may say so about Eero, I think he went into that trap himself for a while.

As a minor point, I suggest getting into The Shadow of Yesterday as written by Clinton, rather than the round-the-bush process of constructing a generic system (Solar System) from it, then applying that system into the original setting as The World of Near. I don't dislike or condemn Eero's efforts in this regard, but I do find them unnecessary, and they imposed a certain almost dissonant effect of ... I'm not sure, density and dispersed focus? ... compared to the feisty original.

Hi Ron! Yeah, I think the elaborateness of the quote made my observation seem much more extensive than intended. The core was just "Oh, you can strategize to take Abilities away from oppoenents in the same way you can strategize to bring your own into play." Obvious, I know. I never could resist a long, Baroque sentence.

To your larger point about how this kind of thinking extended to the level of a campaign becomes toxic/manipulative, I'm going to have to sit with it for a while. I don't disagree at all, just haven't partcipated in enough long-term campaigns to have direct experience. I think as a GM I'm occasionally guilty of the 'soft railroading' you and Justin talked about in the game design curriculum, which feels related.