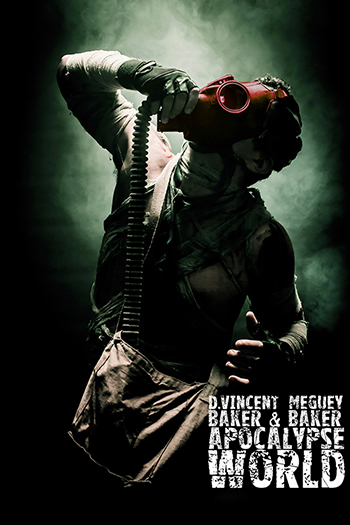 How do you deal with a player that doesn't pay much attention to her resources when playing?

In Apocalypse World, I have 2 players, one of them (Mauro) pays a lot of attention to the rules and moves at their disposal. The other one (Ile) not so much, she rarely remembers her advanced moves. In last session, PCs fell through a trap to a dark basement, then they spent some time exploring the place, took a hostage, then escaped. The session was fabulous, because we often play in a fairly zoomed out fashion, but this trap (which separated them) also had them interacting with the scenario, room by room, moment to moment.
The thing is, Ile might have used a move to escape the whole basement with a single roll, provided she knew a way out. But she forgot, and I forgot too (sometimes I remind her, like, "you have this Reputation move, don't forget").
First thing, she forgetting that move led to an amazing couple of scenes, a lot different from our usual sessions, so in a sense it was productive oblivion. How would that session have changed if she used it to skip the scene and just escape? Later, I wondered if a move that lets you skip a good scene is or isn't good, but Mauro pointed to me that they use those moves tactically: if they want to explore the scene further, they don't trigger them. The downside to those moves is that you can't stay there and discover interesting stuff.

It's not my first campaign with Ile and Mauro, and we've noticed this dynamic, where Mauro provides attention to the rules and drives forward the session with clear goals and problem solving. Ile, on the other hand, plays an observer role, makes questions about the setting, draws connections, seriously ponders conflicts. Her mere presence, in a sense, contributes to deepen the setting by virtue of asking proper or interesting questions.
There are interesting ways to engage with a game other than paying attention to the moves and, uhm, explicit, in-the-book rules, and I'm thinking now there's no point in worrying too much about she using her advanced moves or not.

The other thing I found is that some moves, like Eye on the door for the driver (moves to escape from dangerous situations), are in fact scene-framing powers, and carry their own tactic considerations.

Concentrating on the answer

Let me know if I'm understanding correctly, that your opening question is rhetorical - it seems to me as if you aren't experiencing forgetting moves as a problem for anyone, and that's not really the topic of the post, at least not as a help-me request. When you say, "I'm thinking now there's no point in worrying too much about she using her advanced moves or not," I agree, and I think it's wise of you to see and say.

Instead, we're talking about differences in personal aesthetic approaches to play, perhaps analogous to personal identity in musicianship. I think that's a great topic.

Absolutely, that's a nice way to frame the discussion (in all honesty, I just started writting my thoughts on a couple of subjects, and while I was writing I came to the conclussion).

My first thought regarding personal aesthetic approaches to play is that Ile, on a surface level, isn't gaining as much out of the written procedures as Mauro is. Then I recall that she uses Read a person, Read a sitch and Open your mind a lot, even if she isn't using driver moves as much.

I also think about some procedures we've adopted that are outside the written rules. Specially her theories about the ongoing campaign, characters, and situation, and how this prods me towards deepening stuff I hadn't yet. It's not just her, as I honor her constant questions and the other player alters their character, their plans, in response.

Is there a point in designing mechanics for such a player aesthetic or group dynamic? Like, if the dynamic might emerge anyway.

I've also been thinking about how questions and attention signal what to expand and what to leave behind, specially for prep. I've scratched off bits of prep or prior-to-session-brainstorming, because an enlightening question led me to a much better answer to a question I had about the setting. I've sometimes struggled with players leaving behind characters or situations tied to their (former) beliefs, because on one hand there's an impulse or sometimes even instructions for the GM to have an unattended problem come back to bite their asses. But when I've done it, it felt a bit intrusive, felt like dragging them by their nose back to stuff they're no longer interested in anymore.

Hi Joaquin, sorry for these

Hi Joaquin, sorry for these tardy replies. I like that you’re shifting emphasis toward your actions and roles in these processes.

... her theories about the ongoing campaign, characters, and situation, and how this prods me towards deepening stuff I hadn't yet. It's not just her, as I honor her constant questions and the other player alters their character, their plans, in response.

... questions and attention signal what to expand and what to leave behind, specially for prep. I've scratched off bits of prep or prior-to-session-brainstorming, because an enlightening question led me to a much better answer to a question I had about the setting.

I like to think of situation as foundational. I’m restraining myself from going into a big speech about it, but here’s the point that the speech would eventually spit out, I hope: the idealized “complete setting” is a myth. Backdrops (the part of “setting” that I’m focusing on here) are always a work in progress, and it’s no betrayal of the concept of setting for them to shift away from their entirely provisional and as-yet non-validated starting versions.

Is there a point in designing mechanics for such a player aesthetic or group dynamic? Like, if the dynamic might emerge anyway

I hesitate to jump into this because so far, you are processing so much in your writing that it seem wrong to interfere. But I wanted you to know someone was reading and following along.

Briefly, one of the points in my current classes concerns leaving out specific procedures or even concepts in a given game design, because the existing ones provide enough activity or context for them to develop in play.

The design concern isn’t whether a specific procedure is intrinsically “OK” to be soft or silent, but whether the other, existing, explicit procedures and content are robust enough for it to have the opportunity to appear. Therefore, in this case, one might design explicit procedures for this set of events, but leave other procedures “soft” or “silent; or one might design precisely the opposite for an effect much like what you’re describing here.

Halfway Heroes: The Devil's Workshop
Author: James_Nostack
Department: Actual Play
Here's a helpful hint: never keep a supervillain waiting. In case you skipped the last several...
November Q & A
Author: Ron Edwards
Department: Seminar
Very meaty questions, good examples of highly specific topics which open up important levels of...
In/Over
Author: Ron Edwards
Department: Seminar
"Authority." Ever since I first articulated the concept in 2004, people have broken on the word. ...
I'm just a teenage gunmage, baby
Author: Hans
Department: Actual Play
I did three solo-play sessions of Ironsworn. The audio is here, but be warned that no editing has...